I hope that everyone had a fabulous 4th of July! My family celebrated on the 3rd, which was also dubbed "Tiki Torch Tuesday" by my sister. 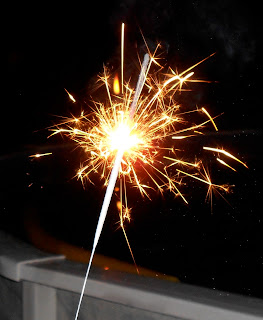 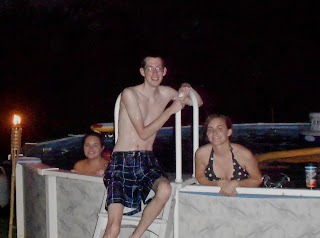 Before the swimming & sparkler fun began, naturally we had to eat. Mom made barbecue  and I brought cupcakes for dessert.
I saw a recipe for frosting on Pinterest that I had been wanting to try. I had also seen a cute idea to sprinkle blue and red Pop Rocks on the cupcakes; we're talking fireworks in your mouth, people! These patriotic pastries turned out pretty well, if I do say so myself. 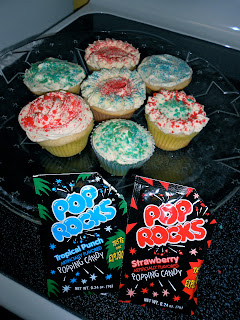 I will note that because the frosting has a hint of yellow in it, the blue Pop Rocks looked more green than I would have liked. Also, the important lesson learned here was to wait to add the "sprinkles" until right before eating the cupcakes because they will pop and dissolve upon contact with the frosting. In other words, the cupcakes were a bit of a red and blue (green) mess when I arrived at Tiki Torch Tuesday. Luckily, I had brought along extra Pop Rocks so we were able to enjoy them like the Founding Fathers would want. 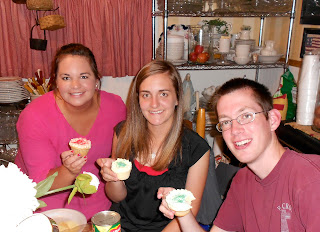 To make the frosting all you need to do is mix 1 vanilla pudding packet with 1 cup milk. Whisk until it begins to thicken. Then fold in 1 container of Cool Whip.
I used the sugar free Jell-O vanilla pudding mix, skim milk, and Cool Whip Lite and it was delicious!
I used white cake mix, and added red and blue food coloring to some of the batter. I also tried to get a little creative and piped various designs on the cupcakes. Overall, I think they were a success. 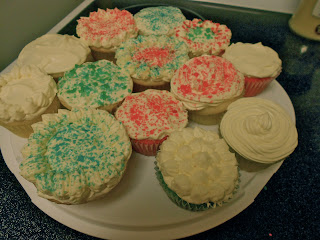 However, I'm sorry to say that not all of the recipes I've recently tried have been quite as successful. I saw a "healthier" way to make cake that involved using fat free greek yogurt instead of eggs and oil. But after trying to make a round of cupcakes and then a cake that both took double the time suggested on the boxes, which lead me to consider a new oven purchase, I declared this recipe a flop. 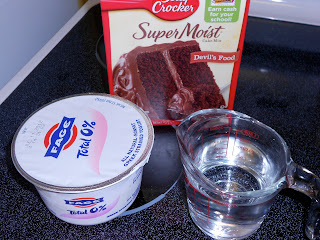 I followed the recipe exactly as it was written: Combine cake mix (we recommend Devil's Food) with 1 cup yogurt in a large bowl and add 1 cup water. Whisk thoroughly and transfer to a baking pan sprayed with nonstick spray; bake in the oven until a knife inserted into the center comes out clean.
Well, after 45 minutes at 350 degrees and no clean knives, I was worried. After an hour, I was mystified. If any of you have done this successfully or make the attempt in the future and experience success, please let me know the secret!

I've tried out some other new recipes this summer, but those will have to wait. Until then, I'd love to hear from you! What's been cookin' in your kitchen?