I know that the NCAA basketball tournament is all about March Madness, but seeing as how the Final Four is taking place on April 6, I think it's only appropriate to call it April Awesomeness.

For Cardinal fans, these first few days of April have been all about awesomeness. Which is remarkable, considering that there was a moment on the last day of March when tragedy struck for guard Kevin Ware. But what has transpired for the University of Louisville since that horrible injury, has been nothing short of glorious.

Let's take a look back at all of the awesomeness that has been the past week, shall we? And while we're doing that, let's go ahead and treat our ears to B Simm's "You Don't Want These Cards", 'cause it's awesome too.

1. Kevin Ware is a rockstar.

I'm pretty sure I  had never heard his voice until this week. But between the interviews he's given for ESPN, CNN, Good Morning America, and the way he owned the Top Ten list on Letterman, I couldn't be prouder that this young man represents the team I love so much. His grace, strength, and humor in the wake of breaking his leg can only be described as awesome.

2. "Louisville First" is a message that's been heard loud & clear.

Just when I thought I couldn't love this team anymore, they stared adversity in the face and overcame it--together. From Luke stepping up (like the captain he is) to make sure Kevin wasn't alone in his time of need, to Kevin holding back his own tears to encourage his teammates to win the game, this special group of Cardinals have epitomized family this week.

3. Two Final Fours proved to be better than one.

After watching our men's team defeat Duke by 22 points to reach its second consecutive Final Four, we switched the channel to watch our women's team take down the overall number 1 seed Baylor. Then on Tuesday, we watched as the women defeated Tennessee to earn their own Final Four spot! In the words of T-Pain, "all we do is win, win, win--no matter what."

Russ Smith was named a third-team All-American. Wayne Blackshear earned the Elite 89 Award, given to the player with the highest cumulative grade point average participating in the Final Four. Chane Behanan won the Pepsi Max Dunk of the Year Award for his knee-to-face monster jam against DePaul. And last but not least, Peyton Siva won the Frances Pomeroy Naismith Award. From the Basketball Hall of Fame: The Frances Pomeroy Naismith Award is named in honor of James Naismith’s daughter-in-law. A panel of representatives from the National Association of Basketball Coaches selects the recipient. To earn the award, the recipient must demonstrate leadership, character, loyalty, all-around basketball ability and excellence in the classroom.
Do I need to quote T-Pain again? 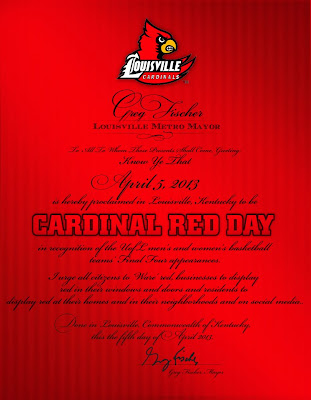 Like I was gonna wear any other color. Do we have an awesome mayor or what?

6. Rick Pitino is a Hall of Fame coach.

Word on the street is that he is expected to be selected for the 2013 Naismith Basketball Hall of Fame class. The official announcement will be on Monday.

What. A. Week. I'm probably forgetting something, but as far as I'm concerned, there's never been a better time to be a Cardinal fan. I wasn't old enough in the 80s to appreciate those glory days of basketball, but I imagine it felt something like this.