It happened. This is real life.
The Louisville Cardinals are the 2013 National Champions.

Tears were already welling in my eyes during the National Anthem.

Knots formed in my stomach as Spike sank shot after shot.

But with 3 minutes left in the first half, MOP Luke Hancock cut the Cardinal 12-point deficit down drilling 4 three-pointers in a row.

And then Siva lobbed to Harrell for a monster dunk, and I nearly tripped on my rug and fell, exploding off my couch with excitement.

The captains continued to lead the way.

And Dieng said "uh-uh-no" to Burke.

Chane went into beast mode and with 4 minutes left, I started dry-heaving, wishing the clock would hurry up.

And then finally, the last second ticked, and the celebration began.

As the confetti fell, so too did my tears.

Denny Crum, the two-time National Champion, Hall of Fame Coach who started it all, smiled in approval.

And on the very day when Pitino was officially welcomed to the Hall of Fame, he became the first coach to win two National Championships at two different schools.

They really did it.

They won it for Ware.

And the city of Louisville rejoiced. 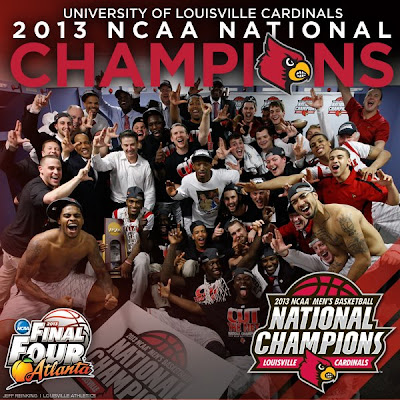 It couldn't have happened to a better team.